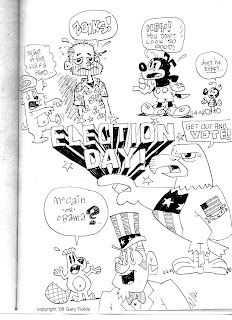 In an effort to post much more frequently, here's another sketchbook page. As usual, free-form micron .03 pen!
Posted by Gary Fields at 7:44 AM 1 comment: 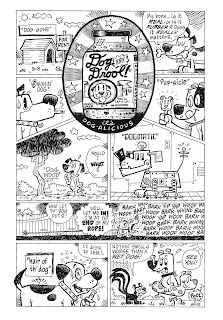 Here's another dog comix page. I originally roughed this out as a single page, but changed it to follow the dog comix page from my Oct. 18 post. So go back and re-read that one and then read this. I'm toying with even doing a third page. We'll see...
Posted by Gary Fields at 9:50 AM No comments: 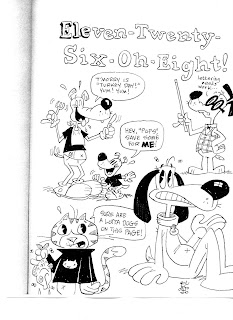 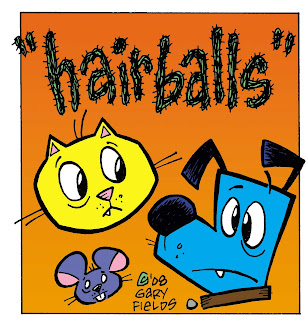 Last week I sent my 2 page contribution to my new bestest pal,Mark, for Popgun Volume 3. Here's the title panel. Once I hear when it'll be coming out I'll post it here.
Posted by Gary Fields at 7:21 PM 3 comments: 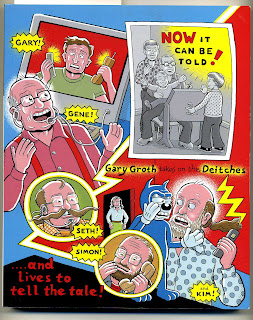 If you haven't picked up the "all Deitch" issue of the Comics Journal #292, you're missing one great read! It's a bunch of interviews with Gene, Kim, Simon and Seth Deitch. As of this writing, I've read Gene, Kim and Simon's interviews. Just starting Seth's. One interesting point that Gene and Gary Groth made about Kim's work was that it was a "hard sell". I can understand what they meant by this, but if want to read some really great comics by a true underground master of cartooning, go buy Deitch's Pictorama!! I can't think of any other cartoonist from Kim's era that is still producing this much work (with the exception of Bill Griffith's Zippy comic strips). I didn't know much about Simon and Seth Deitch, but found Simon's interview to be very interesting. I look forward to reading Seth's.
Deitch's Pictorama has wonderful comics and stories by the three Deitch boys. Kim's "Sunshine Girl" is amazing. He weaves this fantastic tale about bottle cap collecting that incorporates his Sunshine Girl character and makes you actually believe there really was such a bottle cap. "The Cop On The Beat" is another great story, part autobiographical and part historical.
I had seen some of Simon's "Golem" art in Mineshaft magazine and was impressed with his draftsmanship. Great pencil illustrations. I'd like to see what his stuff would look like if he inked it.
I enjoyed Seth's "Children of Aruf" and "Unlikely Hours" stories. "Children of Aruf" was an interesting story about man's best friend with a twist. Kim illustrated "Unlikely Hours" and I thought the text and art worked well together.
Posted by Gary Fields at 5:42 PM 1 comment: